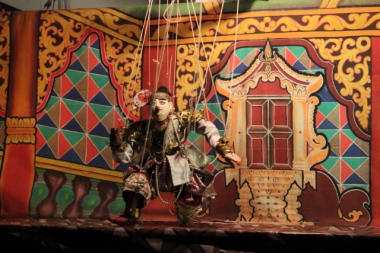 It started as a story

As old as all of time

Relieved of any rhyme.

A play upon a stage

The actors held on strings

To perform at any age

Both sad and glorious things.

We agreed to take the part

Not knowing how to feel

Just wishing to be real.

Pulled in that and this way

Our body, arms and legs sway

Dangled by some thread.

We have this opportunity

To act the story out

In whichever way we see to tell

What it’s all about.

We rise and fall with ease

Under power not our own

And dance upon a breeze

While longing to go home.

We wish for some control

Not knowing how it’s done

But the curtains too soon close

If only we could see

That there is nothing at all to fear

For we are not the puppet,

We are the puppeteer.

Dear Lord, intelligent essence of all there is…

Thank you for this new day and all the potential that lies within it.

Please help me keep my thoughts, words and deeds positive because in each moment the future is created.

Help me to remember that all my needs will be met because every possibility exists.

Please allow into my life that which will give me wisdom, strength and understanding.

Give me the peace and courage to love and respect all living things for they are what I am – a child of the universe – and the energy that moves within us is the same.

I ask that I may find the balance to perform my work with the same joy with which I play.

Please help keep my heart open, my mind clear, and my body healthy so that I can fulfill my greatest destiny. 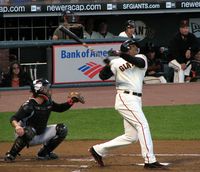 It’s been twenty years or so since my son Dylan said that.  Something had ended up broken – probably due to “just messin’ around” – and restitution was owed. Usually, I’d cover what losses were incurred, but for whatever reason, this time I had told him that it was coming out of his money. He smugly replied that he had no money. “Easy fix.” I said “You have baseball cards. I guess we’ll have to sell one of those.”  “The Barry Bonds” referred to the acrylic-encased prized rookie card.

Bonds is now considered to be one of the greatest baseball players of all-time. He has a record-setting seven MVP awards. He is a 14-time All-Star and 8-time Gold Glove-winner. He holds numerous Major League Baseball records, including the all-time Major League Baseball home run record with 762 and the single-season Major League record for home runs with 73 (set in 2001), and is also the all-time career leader in both walks (2,558) and intentional walks (688).

But that’s not what made him special. Not to Dylan. He was special because he was born on July 24th.

I remember when he discovered the fact that people who had accomplished great things had been born on his birthday. A look came over him, a look of simultaneous amazement and pride. The look conveyed “Why not me?”

It’s been all downhill from there.

Dylan was convinced from that point on that being born on a day that special was proof of the magnitude of his own destiny.

And who am I to judge? Just a parent… trying to build the confidence of her eight-year-old. So yes, I agreed that being born on July 24th was indeed a most fortuitous event. The universe clearly had big things in mind to have him arrive on such a day. And that’s what I told him “You’re Dylan. And the Universe loves you.”

He’s a grown man now… married to his college sweetheart, expecting a baby girl next month. He works in the industry that has always fascinated him – Finance. He restored a bargain-priced foreclosed house into a very comfortable home in the mountains. And he is, by all accounts, the “nicest, most even-tempered guy” anyone has ever met… at least that’s what people tell me.

On his wedding day, one of his guests asked “Dylan, man, you have it all… a great house, a fantastic job, and now a beautiful wife. You just seem to get everything you want. How do you do it?” With his characteristic laugh and big smile, he replied, “I’m Dylan and the Universe loves me.”

All because of that one special day. And what do we know about birthdays? We all know birthdays are like… well, they’re like opinions… everybody has one. So who are the greats born on your day? Maybe it’s you.

“You say it’s your birthday

Well it’s my birthday too, yeah

You say it’s your birthday

We’re gonna have a good time

Happy birthday to you.”
~ The Beatles

At the end of the journey to all of the previous frontiers, man encountered strangers. When the Neanderthal left the cave, he met Cro-Magnon. When the Greeks left the Mediterranean, they met Europeans.  When Europeans searched for spice, they discovered the Asians. When Columbus sailed for India, he met… well, Indians.

And now our explorations take us beyond the solar system to search for other stars and life on other planets.

My first question is, What then?

What’s our plan if we locate a little speck of dust circulating around a little twinkle of light in the dark sky?  What if we determine that on a unique ball of clay, the temperature is not scorching and the atmosphere isn’t poisonous gas? What do we do then?

While you ponder that…

What if, after all of our searching and exploration, throughout all of the eons of time and vastness of space, there is no other place like this one?

What if this speck is the ONE with life on it? What if the magnificent diversity of our Earth is as good as it gets? What if everything else in this hot mess of a galaxy is just star stuff, and nothing else breathes?

Maybe the orchestral genius that it took to cool and heat, to crystallize and solidify, to grow and blossom, and to think and love ourselves here has only happened once.  When you think about it, it’s a miracle there’s any life in this universe at all.

And yet, here we are – each of us – more rare and precious than stars… and certainly more accessible – traveling companions for whatever journey awaits.

So what if, the next time you look at a stranger – their eyes and smile, personality and character, unique in the universe of humanity – you see them with the same wondrous awe you have when gazing up at the night sky? And then treat them with mankindness. We are not alone in this Youniverse. We have each other.

“A subject for a great poet would be God’s boredom after the seventh day of creation.” ~ Nietzsche 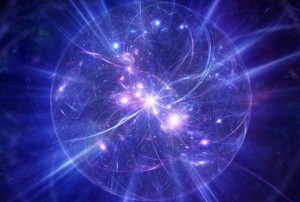 Alas, said the Lord
Look what I’ve done
Life and death forever
It has begun

Portraits done from your photograph

Portraits done from your photograph

Thanks so much for your support…